It is a quiet Saturday morning here in Verdun, just on the edge of Montreal. My arm is a little sore, not from the usual excessive drumming or gear hauling, but because a few days ago I got my first tattoo. It is something I’ve wanted to do ever since I bought the Red Hot Chili Peppers’ album Blood Sugar Sex Magik on cassette in 1991. Looking at my tattoo today, I am reminded of the Chili Peppers’ album art filled with close-ups of the band members’ tattoos, the explicit lyrics and the music that blew my mind. Catchy hooks and rhythmic complexity combining sounds of punk, funk, hip hop and pop with production by Rick Rubin, struck me in a way I didn’t know was possible. Already a student of the drums, I would spend hours playing along to the album as accurately as possible, learning drummer Chad Smith’s grooves and fills. Now, this wasn’t the first time I had been obsessed with an album. There had been many times before, and would be many times after that I would hear a recording and think, “This is the greatest thing I have ever heard.”

For whatever reason, I had an instinctive, natural attraction to collecting music and learning about bands and artists. It was something that just started happening. I bought my first LP around 1987 at a Christian rock concert in Winnipeg. It was Randy Stonehill touring his album The Wild Frontier. I was just beginning to develop the idea that I wanted to learn the drums, and now I was seeing and hearing a live rock drummer for the first time. I soaked it all in, got Randy Stonehill’s autograph on my LP, and started dreaming of my own rock stardom. After that, pretty much all savings went toward records, then cassettes and CDs. My drum teacher David Schneider encouraged me to listen and play along to all genres, from Manteca to Metallica, The Beach Boys to Beastie Boys, Ella Fitzgerald to Enya . . . you get the idea. Each Christmas, my father gave me an album that he thought I should and would be into. This included a recording of Stravinsky’s Rite of Spring, Johnny Winter Hey, Where’s Your Brother and Art Blakey & The Jazz Messengers One For All (featuring Blakey’s famous quote, “If you make a mistake, make it loud so you won’t make it next time.”). Combining my love of collecting albums, with my interest in drumming and all fuelled by my parents and teacher meant that omnivorous listening was not a topic of discussion, it was just a way of life.

It would be easy for me to write a multi-volume series about the albums that changed my life over the years and I am really holding back on letting that rip here. Instead, I’ll

return to the topic of my tattoo. In part, it represents my lifetime obsession with album collecting, bands and their influence over my own playing. I also turned forty this year, so I could probably make a case for the “midlife crisis” move, but it is more than that. Arriving next week are the vinyl test copies of my first solo album, and this tattoo is the custom design from the front cover. Thirty years after getting my first autographed LP, I’m finally releasing my own solo album Katana of Choice — Music for Drumset Soloist.

Receiving the the test copies is one of the last stages in a process that has taken the better part of the past year. The project itself is a culmination of my performance style, commissions and research which began a little over fifteen years ago. Before about 2005, I mostly treated the drumset as an instrument existing outside of contemporary performance tradition. Having spent years at the university level developing as a solo and chamber percussionist (1996 – 2001), I realized I had drawn a line, or maybe had one drawn for me, between the drumset (typically associated with improvisation and popular music genres) and the contemporary musical community and practices I was now a part of. 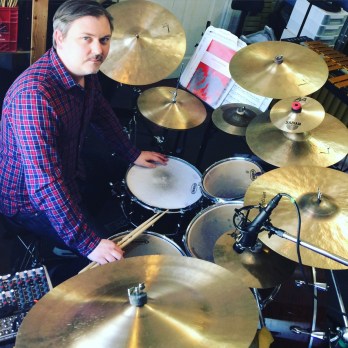 So, I began exploring a new role for the drumset in the context of contemporary through-composed music. At the foundation of this journey was my deep respect and admiration for iconic players—discovered over my decades of omnivorous listening—who had opened new musical and technical possibilities of drumset performance for the past 100-plus years. I have remained connected to this history when crossing over into the context of contemporary composition. I have thankfully met composers equally interested in exploring with me. Of particular note is Nicole Lizée. Her innovative compositional style, along with an unprecedented knowledge of the drumset and its recorded history has resulted in a multitude of new compositions in recent years.

Take for example, the title track from my album Katana of Choice, for drumset soloist and percussion quartet. Nicole draws inspiration from what she calls “classic drumset paradigms” to create parts of the musical material throughout the work. These paradigms are iconic grooves, sounds and techniques associated with influential players. Consider the groove from Paul Simon’s “50 Ways to Leave Your Lover.” Known simply as the “50 ways groove”, it was imagined and performed by studio drumming legend, Steve Gadd.

The outcome of this groove as it appears in the piece “Katana of Choice,” is that it is changed into sextuplets, and in other ways manipulated, reconstructed and looped. Transformed into something completely new, it would take a very keen ear to catch the original reference. As the performer, recognizing this paradigm in the composition is essential since I must be able to play the original “50 ways groove” in order to have absolute control and fluidity with the shifted, mutated material by Nicole.

In 2014, I recorded “Son of the Man with the Golden Arms” by Nicole for her album Bookburners. Featuring drumset soloist with percussion ensemble and two electric guitars, the piece explores, among many paradigms, the classic “Purdie Shuffle,” by legendary drummer Bernard Purdie. Purdie earned the title “World’s Most Recorded Drummer” during his career recording with such artists as Aretha Franklin, Donny Hathaway, Miles Davis, B.B. King, Cat Stevens, Steely Dan and many more. With a style rooted in jazz, funk and soul, Purdie’s shuffle became his signature groove, instantly identifiable in his recordings. The basic elements of the groove are the triple feel, accented hi-hat on each beat and the combinations of grace notes and accents on snare, creating a half-time feel.

In this piece, the Purdie Shuffle is recontextualized by Nicole, who reorders and loops the common elements of the groove. Grace notes on the snare become a prominent and intricate element, often increased in number and therefore displacing the anticipated accents. For the performer, execution demands technical control, along with exposure and internalization of the original Purdie feel and sound. While it is impossible to match Purdie’s deep groove, I do my best in each performance of the piece.

Along with Nicole Lizée, I have been fortunate to work with wonderful composers such as Lukas Ligeti, Eliot Britton, Rand Steiger, John Psathas and Vincent Ho. With so many unique approaches to drumset composition, the most rewarding part of this journey for me has been my own growth as a player. Just as I did with the Red Hot Chili Peppers back in ’91, I still look to players, bands and musical styles to inspire me. This adds to the tools I bring to the table when working with a composer. In recent years, I have become immersed in various sub-genres of heavy metal such as progressive metal, technical death metal, viking metal and so many others. Drummers of this music are pushing the limits of musicality, speed and rhythmic complexity. For myself, developing skills used by metal drummers such as four-limbed independence and rapid playing (particularly on the kick drum using two bass drum pedals) have opened doors to new possibilities when working with composers of contemporary music.

As a kid, I wanted to be drummer Chad Smith from the Red Hot Chili Peppers or Larry Mullen Jr. from U2 or David Garibaldi from Tower of Power, and the list goes on. As a result, these drummers I’ve listened to over the decades have shaped who I am as a player. I’ve come to a realization that at some point in my past, I needed my omnivorous listening to be at the forefront of my performance. I’ve had an expectation that my performance life should reflect everything I’ve taken in over the years, Randy Stonehill rock concerts and beyond. I don’t know if it is really possible, but while playing this new repertoire of contemporary drumset music, I think I’m getting close to showing who I really am.  Just like this new tattoo, I wear it on my sleeve.