Last week I enjoyed participating in a pair of Megumi Masaki’s Music4Eyes+Ears concerts. Meg has been commissioning and performing multi-media works for many years now and has amassed an impressive repertoire. Often combining electronics and unusual performance techniques, the music can range from big and brash to delicate and intimate. There was plenty of food for thought in the various pieces, but it was hearing Kotoka Suzuki’s In Praise of Shadows that sent me down a rabbit hole—contemplating the potential of handmade instruments.

Using paper as a sound source is not really earth shattering, after all, Tan Dun’s Paper Concerto (2003) has been performed around the world for more than a decade.

But this concept of single-use or homemade instruments has been fascinating composers for quite some time now. Just like the 100 mile diet—which I’m pretty sure I could never survive—it speaks to concerns about the environment and issues of depersonalization that can arise from the consumption of mass-produced anything!

I can’t imagine making music over the long haul without at least some access to our tradition of finely crafted instruments and the advanced playing techniques that have evolved over hundreds of years. But there is something unique and personal that can shine through when a performer has invested their own creativity and craft into some of 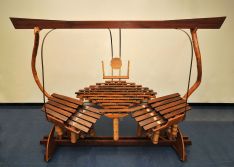 the sound producing materials they use in a composition. On one side you have people like Harry Partch, who was known for creating a whole collection of instruments that would allow for the exploration of microtonal scales (up to 43 tones per octave) and on the other side you have groups such as the Vienna-based Vegetable Orchestra:

Most of their instruments are single-use, needing to be re-created before every performance.

Another equally extreme example is the Orquesta de Instrumentos Reciclados de Cateura, from Asunción, Paraguay. I saw an exhibit of some of their instruments on my recent visit to the Musical Instrument Museum (MIM) in Phoenix:

Pretty amazing stuff! They have replicated everything from cellos to guitars and saxophones and have performed with musicians as diverse as Stevie Wonder, Metallica and Megadeth.

The Trinidadian Steelpan tradition, which has almost became a classical music in its own right, grows out of a similar “use what you can find” approach to the human need for music making.

Another exhibit I toured at the MIM included instruments that had been recovered from burial sites in Central China. A bone flute that dated to over 7,000 years ago was another great example of an instrument handmade by its performer. That made me think about the Don McKellar/François Girard film, The Red Violin (with an outstanding score by John Corigliano)—which follows the mythical adventures of a cursed violin.

Indie-rock musicians have been fascinated with unique and unusual sound sources since the beginning of the genre. The always groundbreaking Björk is a great example. She had several new instruments made for her album Biophilia, including the Gameleste, which combines characteristics of the Gamelan and the Celeste. It provides the main backing sounds in her song Crystalline:

Last week, composer Harry Stafylakis asked his Facebook community for ideas about pieces that would work outside in the extreme cold of a Winnipeg winter (we’re talking -25° to -40° C). I immediately thought about the ice instruments created by Norwegian percussionist and composer Terje Isungset. Here’s an example of his work with singer Mari Kvien Brunvoll:

If the Universe gives you ice, make some “cool” instruments!

If the Universe gives you “vintage” videogame equipment, then you should make Chiptunes:

The amazing thing about these somewhat extreme examples of DIY instruments/sound sources is that so much creativity can flow out of restricting your sound sources. As we continue to explore the potential of diverse sound sources, we also continue to find new expressions of ourselves.

If you would like to suggest the name of a musician who you would like to see contribute to the Omnivorous Listeners Blog… send me an email with their contact information (carrabre@brandonu.ca). I can’t promise that we’ll include them, but we are always looking for new contributors.

And to round out the formal structure of this week’s entry, here’s a link to the trailer for Megumi’s recently released album and Blu-ray DVD, which includes some newly created sound-triggering techniques (where her hand movements above the piano produce electronic sounds from an environment constructed by Keith Hamel):